This post might come a bit late but this is in response to  Bob Pusateri‘s T-SQL Tuesday topic  about presenting. T-SQL Tuesday is a monthly blogging event, with a different community host each month.

So, how did I come to present and loving it?

“a journey of a thousand miles begins with a single step”

After getting my graduate degree I stayed as an  Assistant Professor at Politechnica University of Timisoara, my Alma Mater, teaching seminars and labs on Programming  101 (Turbo Pascal … oh my!) and Relational databases labs while being the resident Oracle DBA at the Software Engineering department. 3 years later, I switched to a full time job as Oracle DBA and later  moved to a different continent with a different language and being an ESL speaker I did not think I would be speaking at public events… until 2 years ago at SQL Skills Immersion Events in Chicago (with Bob Pusateri!! our blog host). On the fourth day of the IE 1 class I volunteered to present a slide deck on SSD technology . I was extremely embarrassed as I felt like I was not in the same league as the rest of the presenters, but everything went so well that it made me reconsider my thoughts. As a matter of fact it made me submit a couple sessions for SQL Saturday #82 in Indianapolis and this was the beginning of my public speaking adventure. Later that year I actually presented 2 sessions in a day at SQL Saturday #96 in Washington, DC and the feedback was excellent.

Starting on a journey as a speaker that has been incredibly rewarding and even though most of the time I paid for it out of my own pocket, the knowledge and the friends that I made on this journey were worth every effort. Last year two of my goals came true: attending PASS Summit for the first time and presenting my session titled “Optimizing SQL Server I/O with Solid State Drives ” at PASS Summit 2012. To put things  in perspective, 2012 has proved to  be truly amazing: Being mentored by Joe Sack blog|@josephsack from  SQLskills, attending my third  SQLskills Immersion Event – IE3, speaking at 6 SQLSaturday events in Madison WI, Chicago IL, Indianapolis IN, Iowa City IA, Kalamazoo MI and Minneapolis MN. I was extremely honored to be selected to speak a PASS Summit 2012, the greatest SQL Server conference of the year where I was joined by more than  150 of the industry’s leading speakers while having the unique chance to meet over 5000 database professionals.

My friend Paul Timmerman mentioned  in his post that last year I inspired him  to  start presenting. I am deeply honored to grow the community and inspire others to start speaking at community events the same way as I was inspired by Brent Ozar, Jes Borland, Paul Randal, Joe Sack and many other folks that are now part of my #SQLfamily

…and it all started 2 years ago with a session that was not supposed to last more than 15 minutes.

This week I will be attending my 4th SQL Saturday in Chicago, second time as a speaker,  hope you can make it to my session or just come by and say hi.

As some of you might be aware Paul Randal (blog | twitter) has just announced the launch of a new SQL Skills Community Mentoring program for a few individuals that took part in the SQL Skills Immersion Events. I’m deeply honored to be one of the select few that get access to invaluable advice from what I consider the best team in the SQL Server world. 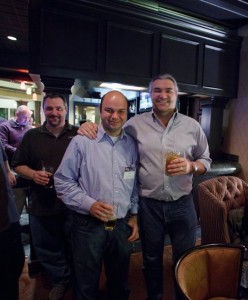 Allow me to go back to a year ago (and boy what a great year 2011 was), when I could only dream of getting trained by Paul Randal and Kimberly Tripp, but my perseverance paid off and after multiple requests,  me and my buddy Vince managed to convince the company to send us to the first week of Immersion training in May this year especially since it was in the western suburbs of Chicago. Very soon I realized that this is by far the best training I have ever received, period. The amount of content was overwhelming (as Brad put it “it’s like drinking from a proverbial fire hose”) but the presentation style was extremely engaging and well prepared. Paul and Kimberly don’t just tell you “this is what you should/shouldn’t do” they go beyond that and explain why and how  and then they demo the whole concept. Just like a good teacher they can take a difficult topic  and present it in a way that makes it easy for you to follow and absorb  a lot of  information.
On the fourth day of the IE 1 class I volunteered to present a slide deck. I was extremely embarrassed as I felt like I was not in the same league as the rest of the folks present, but everything went so well that it made me reconsider my thoughts. As a matter of fact it made me submit  a couple sessions for SQL Saturday #82 in Indianapolis and this was the beginning of my public speaking adventure. A few days ago I actually presented the same slide deck from IE1 at SQL Saturday #96 in Washington, DC and the feedback was excellent.

Last month I continued my learning odyssey with the second week of training (IE2). Right away  the fact that we attended IE1 made a huge difference and it helped us understand a lot better the subjects presented to us. This time it wasn’t just Paul and Kimberly but Jonathan and Joe  have joined them adding their technical skills and expertise to the table.   I learned so many new things that I have already used in my environment.

To conclude, these classes have helped me to understand significantly better how SQL Server works. Things like PLE, forwarding records, heap fragmentation, index tuning, page structure, SAN performance, waits and stats, extended events, NUMA architectures, MCM program are only a few of the subjects that were explained in great detail.

Now on the last binary day of  the century all this becomes even better by having the unique chance to have someone like  Joe Sack as Mentor and working with him to advance my career. It’s been an incredible year for me and I look forward to work with my Mentor Joe Sack and  see what the next 6 months will bring !

Once more, thank you SQLskills. It is an honor to be in such good company.